This PLC creates a space for discussion, learning, and collaboration for International Relations Officers and others whose work focuses on supporting and promoting international collaborations. 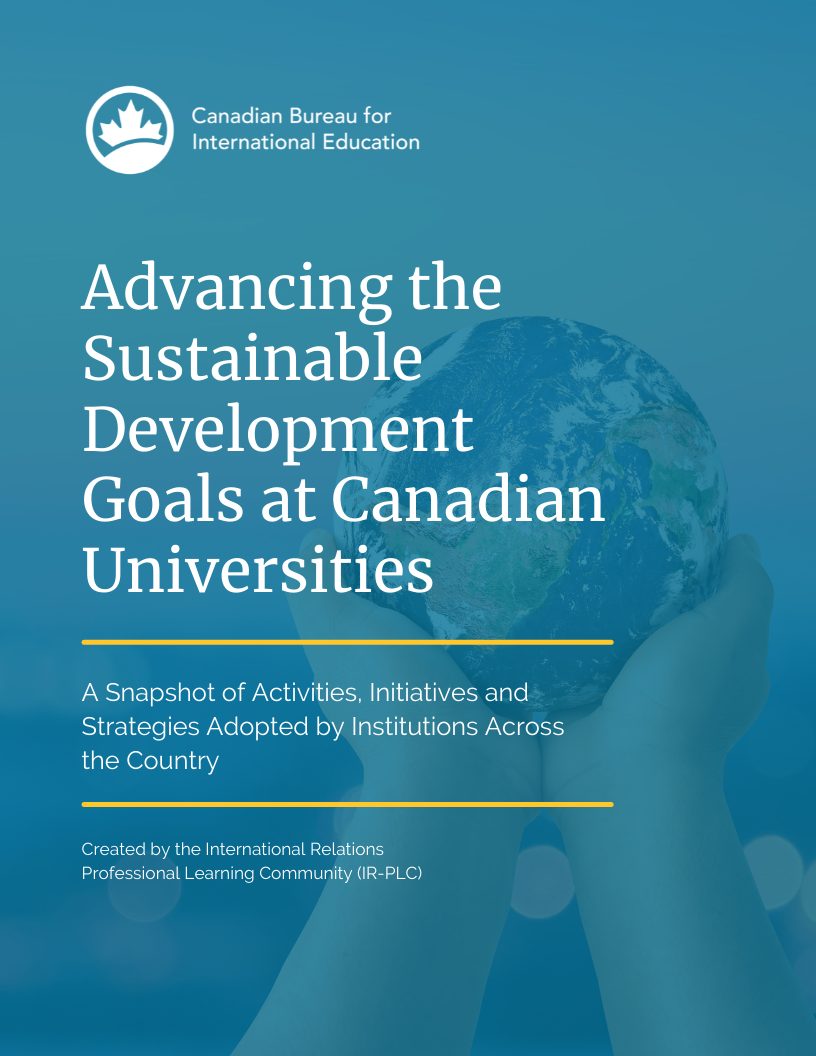 This is where the resources will go when they’re available!

The mandate of the IR-PLC is to create a space where International Relations Officers can share experiences with their colleagues across Canada, exchange and access information, opportunities and best practices, link in to the wider international relations community and work together to champion international collaboration in Canadian higher education institutions. The IR-PLC also enables Canadian IROs to connect with peers in areas of common interest and we aspire to do this in ways that include our global community of practitioners.

The IR-PLC group welcomes members from all levels of the international relations field and who hold diverse responsibilities within IR from across the country. Members are encouraged to actively contribute to the group’s rich discussions.

Andrea Delgado Morrow is the director, international relations for the University of Calgary’s international office where she and the team are responsible for institutional partnerships and agreements. She holds an MA in intercultural and international communication from Royal Roads University. Andrea has over 15 years of experience working in post-secondary education.

This includes University of Calgary, regional manager (Asia Pacific) and associate faculty member at Royal Roads University and Mount Royal University (Faculty of Communication). Throughout her career Andrea has been active in the international education realm sitting on various committees and currently sits on the steering committee for the Canadian Bureau for International Education’s international relations professional learning community.

Janine Denis Gonzalez is the Partnership Development Specialist at the University of Ottawa. She is responsible for managing international partnerships that support institutional internationalization objectives. She also advises faculties on their international engagement initiatives and manages programs in strategic spheres.

In her current role, she is responsible for partnership management and initiatives in Europe, the Americas, and the South Pacific regions. She is also a Committee member of the International Relations Professional Learning Community of CBIE.

Yukino is fluent in both English and Japanese, and received her BA Honors in Sociology from the University of British Columbia.

Dan Fredrick has more than 20 years of experience in international relations, education, research, and client services.

Since 2008, Dan has held leadership positions in the International Office at the University of Alberta. In his current role as Director, International Projects, he seeks to create training and education partnerships to share the University of Alberta’s expertise worldwide. Dan’s leadership role in this unit includes responsibility for international business development, proposal development, and the cultivation of strong relationships with public and private sector partners within Canada and around the world, and coordination and sourcing of expertise within the University and beyond.

Dan has also developed the Sponsored Student Program at the University of Alberta, which is Canada’s first dedicated program to provide service and support to international university students who are financially sponsored through scholarships from their home countries. Under his direction, the Sponsored Student Program has tripled the enrollment of international sponsored students at the University of Alberta, and has become one of the largest such programs in North America.

Prior to joining the University of Alberta, Dan taught History, Geography, and Governance to secondary students in Ottawa; served in the Canadian Parliament as a Foreign Policy Advisor to one of Canada’s national political parties; and worked in Canada and the Middle East as an Immigration Consultant. He holds Master’s degrees in International Affairs and Religious Studies.

Felipe is an international project manager with extensive experience building high-level relationships, driving internationalization and supporting projects across four continents. He speaks three languages fluently, and has worked and lived in seven countries, successfully designing, implementing and managing international education and development projects in both developed and emerging markets. Felipe has implemented projects with several international organizations, including UNESCO-UNEVOC, GAC, and the MasterCard Foundation. He currently works at NorQuest College in Edmonton, AB, and serves as the Vice-Chair for ACGC’s Board of Directors.

Miyuki Arai manages international mobility programs and partnerships as well as promotes pan-campus processes and initiatives which support the strategic priority of Intercultural Learning for the University community. She has been engaged in various aspects of international education since 2004 at her alma mater, Saint Mary’s University. She holds a Master of Arts degree in Intercultural Relations from Lesley University in Cambridge, Massachusetts.

Stéphanie is an agent of change at Polytechnique Montréal operating with a transversal and collaborative approach in order to engage the university’s stakeholders in the internationalization process. She thrives at mobilizing stakeholders on structuring consensus, supporting the development of strategic actions and coordinating the execution of multilateral initiatives.